Are you looking for ketamine treatment in Tampa? Ketamine is a well-researched, dissociative anesthetic that was approved by the FDA in 1970. Since then, Ketamine has been used extensively for pediatric and adult treatment in surgery, emergency departments, ambulances, trauma medicine, and war zones. It is a commonly used medication in veterinary medicine. The World Health Organization lists Ketamine as one of the most essential medications due to its therapeutic effects and wide margin of safety.

Over the last decade, Yale University and the National Institutes of Health identified additional benefits of Ketamine in treatment of mood disorders and chronic pain. The use of Ketamine for depression has been named “the biggest discovery in mental health in decades.”

So how does ketamine work exactly?

Ketamine is known as an NMDA receptor antagonist. Many researchers are still searching for exactly how the medication can affect mood so rapidly and effectively, but what we do know is that ketamine works on glutamate, one of the most numerous neurotransmitters in the body. This increase in glutamate can cause a cascade effect of increased neural activity and communication in the brain. The areas of the brain which have shutdown due to over anxiety and depression, are suddenly awakened. Ketamine causes neuroplasticity, or new neural growth, a “rewiring” of the brain believed to play a big part in the lasting anti-depressant effects.

We know that ketamine is not only working on the NMDA receptor, but ketamine is also working on other receptors such as GABA receptors, G protein-coupled receptors, and small effect on cholinergic Mu receptors. Along with reversing neuronal atrophy, ketamine also has an anti-inflammatory effect. Interestingly, the dissociative effects of ketamine are believed to play a part in the healing process as well. When given appropriately and titrated in the right doses by a trained provider, ketamine’s multiple mechanisms of action create a powerful, effective treatment for a variety of chronic mental illness and pain conditions. 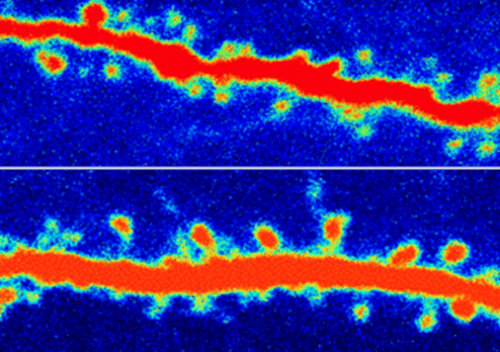 A picture of a neuron. The neuron below shows new dendritic formations, or new neural growth, within just 2 hours of receiving ketamine treatment. 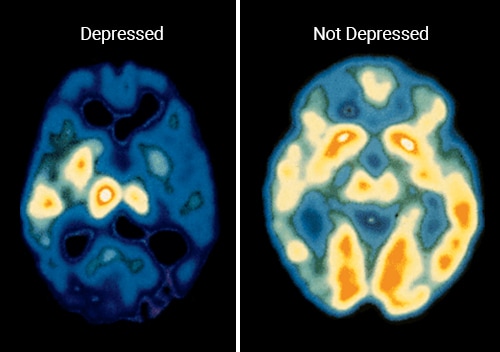 A CT scan of a human brain. After ketamine treatments, the depressed brain is almost identical to the non depressed picture as new neural activity has awakened the depressed areas.

How does ketamine affect the brain?

Ketamine’s effect on the human brain – how it interacts with the Medial prefrontal cortex and Hippocampus in regard to chronic pain, for instance – is open to debate. We know that ketamine, its derivative Esketamine, and ketamine-like drugs, have been shown to reduce some of the symptoms associated with mental disorders like anxiety and depression, and the aforementioned chronic pain, but many scientists who question its advocacy also encourage more rigorous testing because of its potential benefits.

The amygdala, that part of the brain which handles fear and emotion and is more active in people with posttraumatic stress disorder (PTSD), may benefit from ketamine infusion therapy. The drug has been approved by the U.S. Department of Veterans Affairs for treatment of military veterans suffering from symptoms of PTSD. That part of the brain is also vital in how we deal with anxiety and depression, two mental health disorders whose symptoms have received much attention due to ketamine-related studies.

What else do we know about the amygdala? It’s located in close proximity to the hippocampus. It’s here that our subconscious makes decisions, metes out punishment versus rewards, controls emotional responses, memory, and gives rise to many affective disorders potentially treatable by ketamine.

If you or a loved one is suffering from depression, anxiety, PTSD, or a chronic pain disorder that ketamine can help provide relief for we would like to invite you to contact us today for a free consultation to learn more.